The trips in the Canoeing Guide to NSW Rivers which have been transferred to the Waterways Guide. The trips and access point to NSW rivers were documents by a number of Canoe club members starting with the first guide book in the nineteen seventies and then the publication of the second guide book in the early nineteen nineties

The first 2km are frustrating; the river is flat, wide and sandy. Picking the correct channel through the sand is important to avoid running aground. On the right (east) the riverbank rises steeply and the remains of a quarry/sand mine are situated in a gully. The left bank has an area of dunes and vegetation before sloping sharply to the Williamsdale Road. After 3km the river turns west for a short stretch, leaving the sandy bars behind. A series of gentle rapids end in a large "bottom-less pool". The river then resumes its northward course peacefully for a kilometre of big pools, culminating in an easy 150m race. When the river is high, pressure waves abound, otherwise it is a pleasant run dodging the occasional rock. From here the river changes its character. Entering a delightful gorge it is now a single channel up to 10m but usually about 5m in width, set below a wide flood channel of large bare rocks. The sides are generally easy to climb, but portaging can be hard work as it involves a lot of rock hopping. Again the river consists of a series of deep pools ending with total drops of up to 1 m, which are not vertical but slope down. This characteristic continues until the main left bend in the river is reached. Although some of the rapids in this stretch require inspection, all can be canoed. After this point keep a lookout for a gauge which is hidden on the right bank. It is at the end of an easy section and marks the start of the hardest part of the river. The next rapid can be shot on the extreme left and drops 1.5m into a deep pool. About 50m below the pool is the "Big Boulder" lying three-quarter of the way across the river. Most of the water flows beneath it and the surrounding boulders and it should be portaged (on the right) by other than experienced paddlers. Depending on the river height, experienced paddlers, if not deciding to portage, can bypass it by floating or paddling craft on the right. Take care not to be swept near the boulders. Downstream are some difficult rapids, one particularly so because of lack of water and a confusing array of boulders which mask a canoeable route. About 30m below this the river is split into three narrow drops by two rocks and the steep walls of the gorge. The river drops 1/2m in each channel. The left side looks simple but kayaks have a habit of nosediving and getting jammed. The right channel looks nasty but is just wide enough and quite easy. The gorge ends in a pool and the river widens, turns and slides down a straightforward 300m race. The river then runs WNW into sand country to the early finish point at the old sand mine, or to the finish at Tharwa. The rapids in this section are grade 1-3, with perhaps the rock jumble below the "Big Boulder" and some of the others (in high water) approaching grade 4.The river levels on this section can be effected by releases from Tantangara Dam here is a link to the web site to see the release schedule 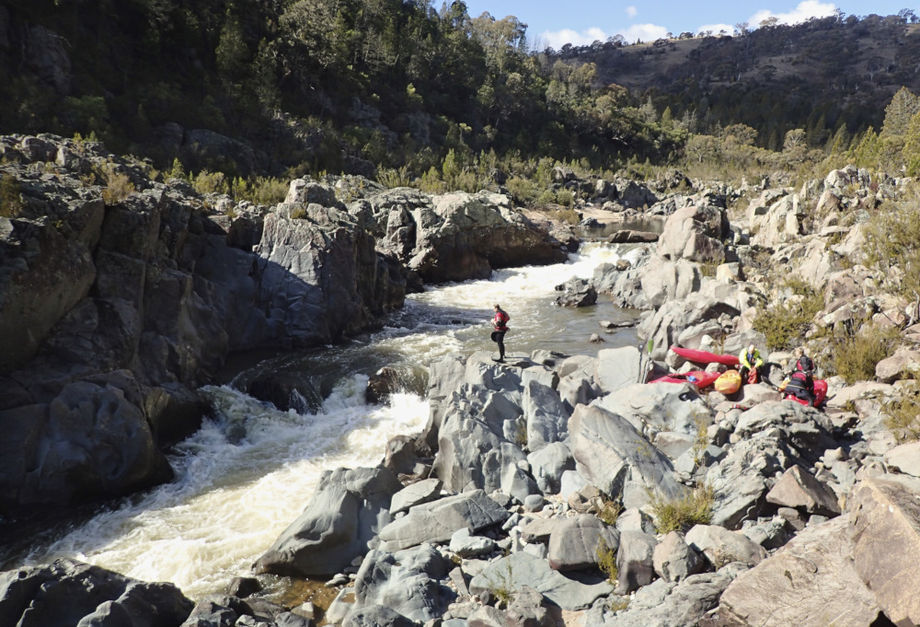 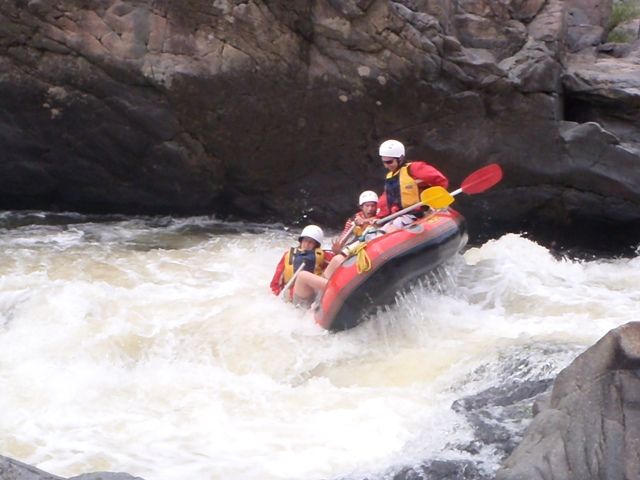 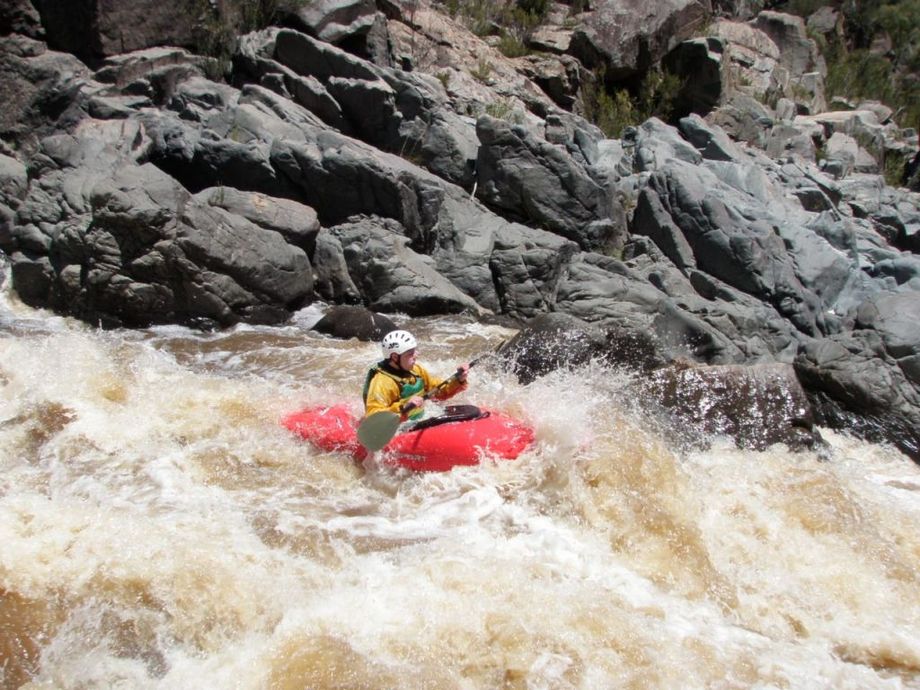 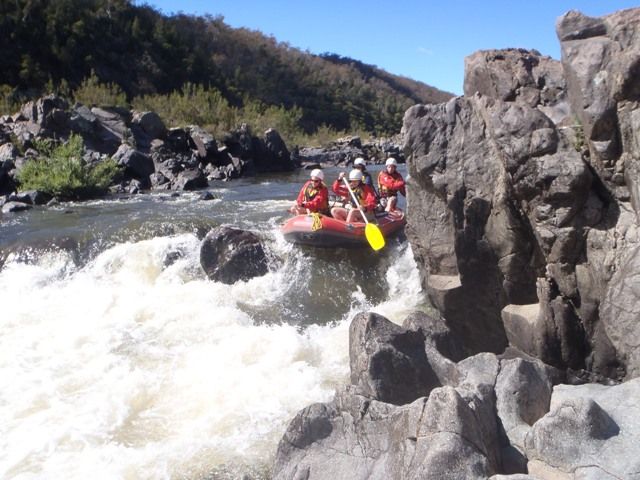 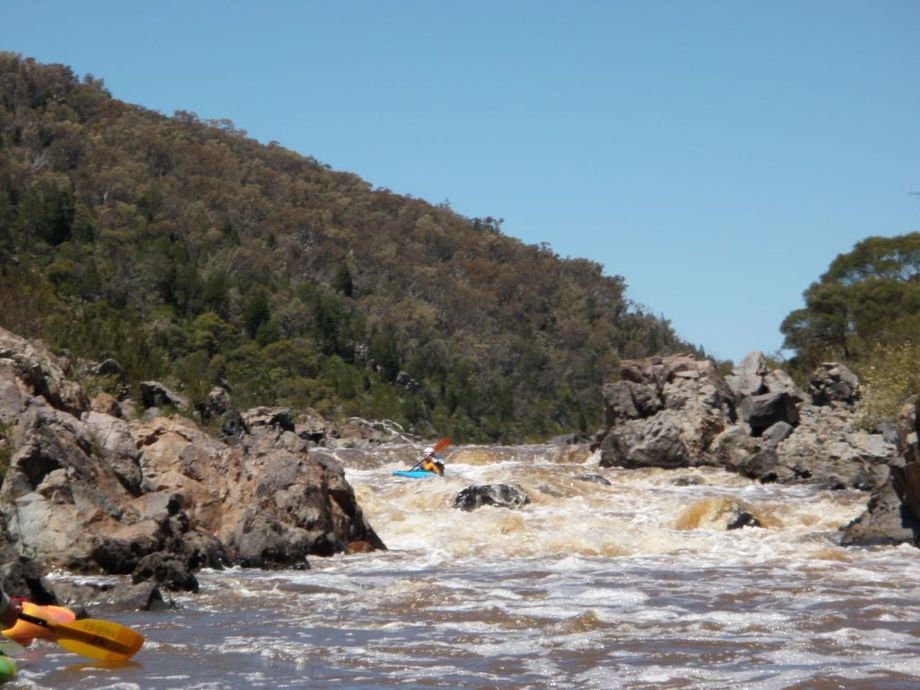 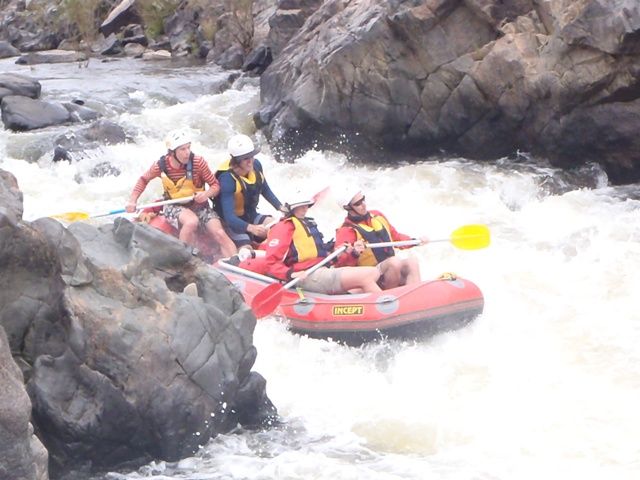 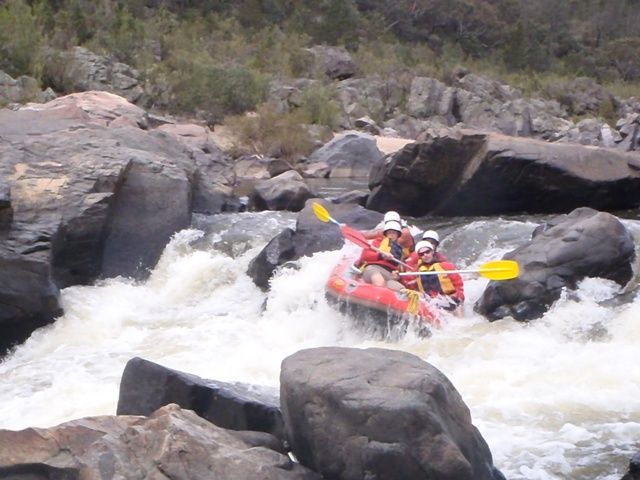 Rafting the Tharwa gorge at the minimum level of 2 meters
Posted By: NSW Canoe Guide , Wednesday, April 30, 2014 - 04:52
Paddling with Style

NSW Canoe Guide
Wednesday, April 30, 2014 - 04:52
Contribute
Looks like you are not allowed to contribute media. Please log in or register to create a new account.
6329 Angle Crossing Tharwa